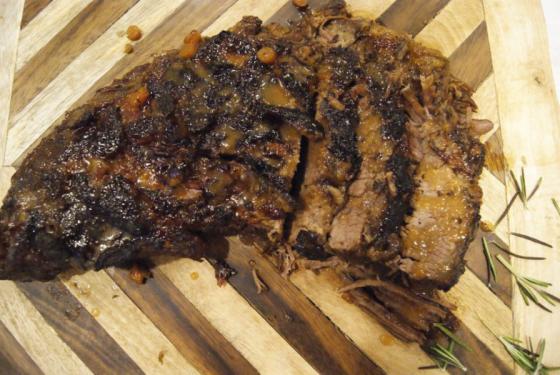 Mix all ingredients in a small bowl.

Rub brisket all over with spice rub. Cover and chill for at least 2 hours or overnight. Let stand at room temperature for 1 hour before continuing.

Preheat oven to 325°. Heat 1 tablespoon oil in a large wide pot over high heat. Add brisket, fat side down. Cook undisturbed until well browned, 5–6 minutes. Turn brisket over and cook until browned, about 3 minutes. Using tongs, transfer to a plate. Reduce heat to medium and add remaining 1 tablespoon oil. Add onion and garlic. Cook, stirring occasionally, until onion is slightly golden, about 5 minutes. Add broth and all remaining ingredients. Bring liquid to a simmer. Return brisket to pot. Cover and transfer to oven.

Braise until brisket is very tender to the touch but still holds its shape, about 4 1/2 hours. Using a large spatula, transfer brisket, fat side up, to a large plate. Strain braising liquid into a large bowl. Return liquid to pot, bring to a simmer, and cook until reduced to 2 cups, about 15 minutes. Score fat side of brisket by cutting a cross-hatch pattern of 1/4"-deep slits spaced 1/2" apart. Return brisket, fat side up, to pot with reduced braising liquid.

Transfer 1/4 cup braising liquid to a blender. Add jam and bourbon and purée until smooth. Season with salt and pepper.

Preheat broiler. Spread 3–4 tablespoons glaze on top of brisket with the back of a spoon. Broil brisket in pot until browned and glazed, watching carefully to prevent burning, 4–5 minutes.

Transfer brisket to a cutting board. Slice against the grain and transfer to a large platter. Ladle braising liquid over. Drizzle remaining glaze on top.