Placing a Bow on the 2018 Dandelion Season 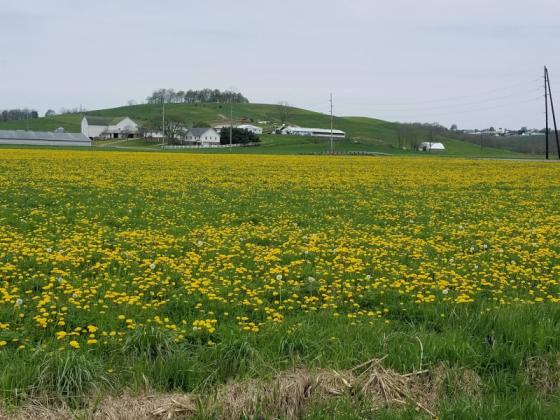 June is here, and that means another early summer dandelion season has come and gone.  Every May, as the temperatures move upwards in Holmes County Ohio, these yellow blossoms start popping up by the thousands in local fields.  What is considered to be a weed by most local folks is actually a real treasure when used as the flavor for our Mrs. Miller's homemade dandelion jelly!  There is only a brief 2 - 3 week span where they are plentiful enough to collect, and the pressure is on to pick, clean, juice, and store them in the hopes of having enough to satisfy fans of this delicious homemade jelly for the upcoming year.

We have enjoyed seeing our Amish neighbor children benefit from this opportunity.  Their summer vacation begins early, as they do not take as many vacation days as their public school counterparts.  With their days wide open, they eagerly picked the dandelion blossoms by the handfuls, bagged them, and anxiously awaited the reading on the scale at the end of the day to see how much money they had earned that day.  Tradition would generally hold that children bring their earnings home to benefit the entire family for the use of paying groceries, gardening supplies, or payments on the family farm.  But in the case of the brief dandelion picking season, neighboring parents generously allowed the children to use these funds to purchase more exciting items such as a trampoline for the family to enjoy!  As seasons of dandelion picking passed, children on our neighboring farms have grown older, graduated from school and taken on construction, farming, and manufacturing jobs, so this year they were no longer available to pick the dandelion blossoms when the time came.  As a result, James (Mr. Miller) had to drive an extra mile or two further down the road at the advice of our Amish neighbors and found a new family with younger children home on summer break, who once again were elated at the opportunity to pick blossoms this season.  And so the cycle begins once again...and perhaps a new trampoline awaits the energetic children of another local family in Ohio's Amish Country!

And yes, you can rest assured, we have enough juiced dandelion blossoms to last us until the 2019 dandelion season begins.